Photo: Grant Marek
I spent an entire Monday at a Santa Clara Panda Express in search of 49ers TE George Kittle
1  /  5
Back to Gallery

Ariana Grande’s “Focus” is blasting as I swing the door open and scan the room.

There are five people inside of Panda Express and it’s only a couple minutes after their 10 a.m. opening. I make eye contact with every single one of them to double confirm: None of them are San Francisco 49ers tight end George Kittle.

It’s a Monday, I’m in a nondescript retail center in Santa Clara just two days after the Niners shellacked the Minnesota Vikings 27-10 a mere five minutes away from here at Levi’s Stadium. I order a small drink (10:06 a.m. seems a little early for orange chicken), fill it to the brim with iced tea and get comfortable because I’m planning on spending the entire day here waiting for Kittle.

Because it’s not a “Monday” for George Kittle. It’s a “Panda Monday.”

I’ve used basically four reasons to convince myself it’s worth subjecting myself to what I anticipate will be many, many (many [seriously, so many]) hours in a fast food restaurant:

1) He’s internet friends with The Rock.

3) He’d be a veritable MVP candidate if the award wasn’t almost exclusively reserved for quarterbacks and running backs (since 1972 only two people not in the backfield have ever won the award).

The fourth reason, though, is why I’m really here.

There’s this burger bar on the Peninsula where — back in the ‘80s — you knew you could bump elbows with Jerry Rice and Joe Montana and Dwight Clark and Bill Walsh and Roger Craig and Randy Cross and Jack "Hacksaw" Reynolds. It was a 49ers staple a mile from their old practice field that existed in an era where sport celebrity wasn’t used as around-the-clock newsfeed fuel, where far less invasive “fan clubs” preceded stan social media accounts and where there was nary a cell phone to turn whatever an athlete was doing over to the 24/7 news cycle to let it get twisted and/or eaten alive.

George Kittle, a once-in-a-generation tight end without the anonymity of that era, not only spends every Monday after a home game at this Panda Express, but he tells the entire world he’s doing it.

I know I’m a day late, but who else experienced #pandamondays at @PandaExpress ?? Cuz I did with @Trent5Taylor 🙌🏻🔥

Four guys in gingham shirts and fleece quarter-zips (hi, Santa Clara) rattle open the door in succession, a rush of cold air enveloping my seat as they do. Then seven contractors soon thereafter.

I’m seated right in front of a giant cartoon panda mural (Kittle has posted photos in this exact same spot on multiple occasions), ensuring everyone who enters will have to make their way directly past my eyeline if they want to get to the counter-service buffet. 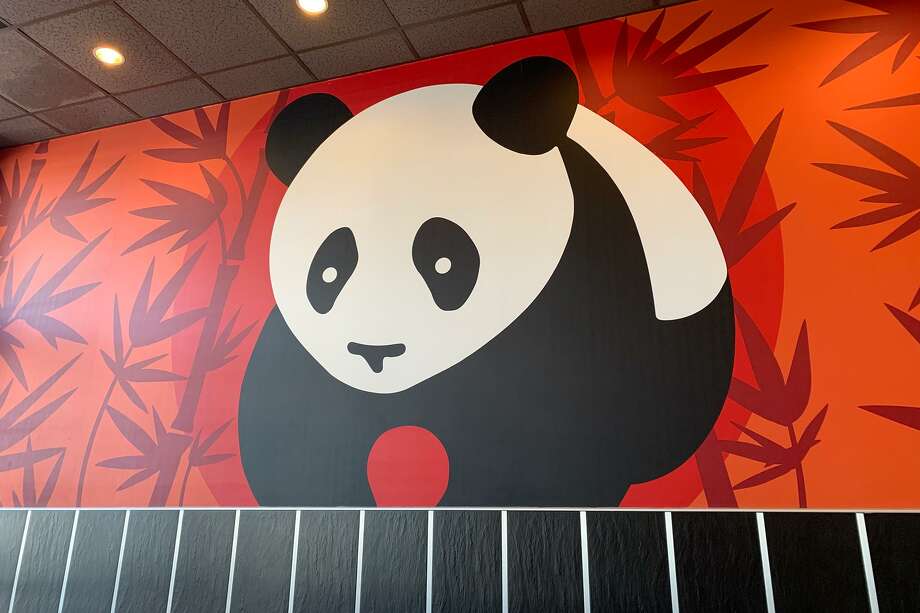 Here’s what I’ve learned about George Kittle’s Panda Express obsession in between ocular pat-downs of all comers:

And here’s what I’ve learned nearly two hours into this stunt: If you’re going to spend several hours straight anywhere that isn’t your work or home, a place that smells like orange chicken is surprisingly not a bad pick.

I’ve had two huge iced teas by now. I feel kind of like I should be making my way through the Panda buffet at this point, but also don’t want to miss Kittle’s arrival.

Weirdly, I haven’t seen a single Niners hat or gold jacket or even just onething red. It’s NFC Championship week, they just absolutely smashed the Vikings on national TV, they’re one win away from the Super Bowl — I fully expected there to be some sort of human tunnel of people ready to welcome Kittle.

The line is now getting longer, onething like 15 deep (I’ve already confirmed zero of them are the former Iowa Hawkeye), but the lunch rush is here, and I need to be on my game.

I check Kittle’s Twitter feed. He tweeted about Halo around 10:30. Nothing new on Insta stories for the past 17 hours.

Eighty percent of the seats here are taken at this point. If he’s coming, I’m not sure where he’ll sit honestly.

It’s just past 1 p.m. and I’m f—ing starving at this point. I finally succumb to the siren smell of sauce-soaked Chinese food and go with what I’ve cobbled together as the signature Kittle order: double order of orange chicken, half-chow mein, half-fried rice, side of cream cheese rangoons.

Just as I finish housing the entire plate, the lunch rush starts dying down — if I’m an All Pro tight end, this is my window. 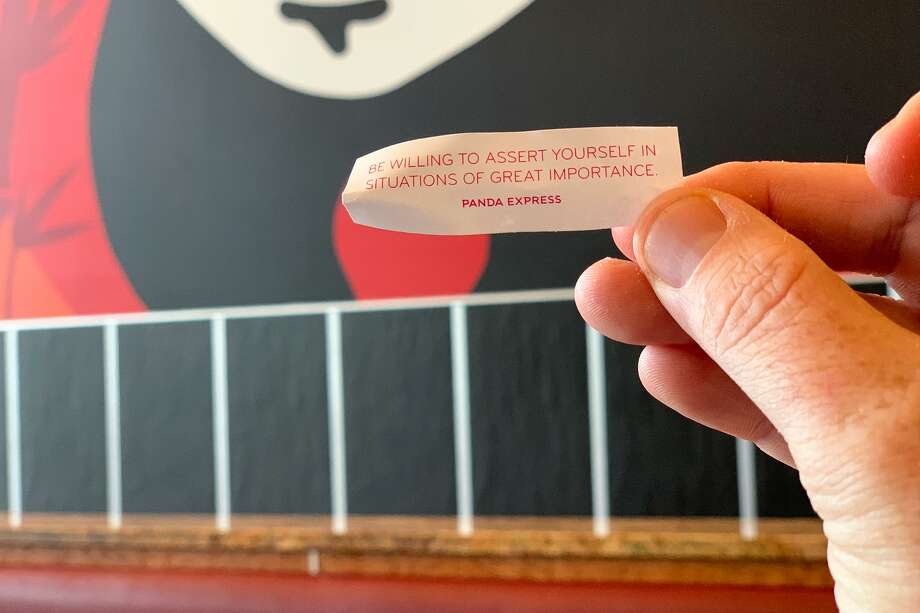 Be willing to assert yourself in situations of great importance.

I’m fairly positive that Kittle is about to walk through that door (great importance) and I’m about to ask him how this became a tradition that has included teammates Adrian Colbert, Trent Taylor, and even his wife, Claire Kittle.

Except he doesn’t. It’s just a guy in far-too-strappy sandals.

“In Common” from Alicia Keyes is playing now.

SOMETHING IS HAPPENING, YOU GUYS.

Virtually the entire staff is huddling around a table in the back of the restaurant. This is it, he’s coming, I can only assume they’re huddling to pass out poppers and hand out silly hats. Or maybe spelling out “KITTLE” on their aprons. I make my way back here to see what all the commotion is and quickly realize they’re just having lunch.

I ask for the manager, and find myself face-to-face with Emily Calderon, who has been running the show at this location on Mondays for the last year.

“Oh yeah, he comes in every Monday at 3 p.m., sometimes he’ll even take a couple of orders for other people.”

She shows me a signed photo of Kittle and the local ABC affiliate’s sports crew during a live interview with six boxes of Panda Express on the interview table. It’s hanging in the “People Spotlight” section of Panda Express’ community board, which immediately puts it in the running for Most Impressive Panda Express Community Board of All Time. 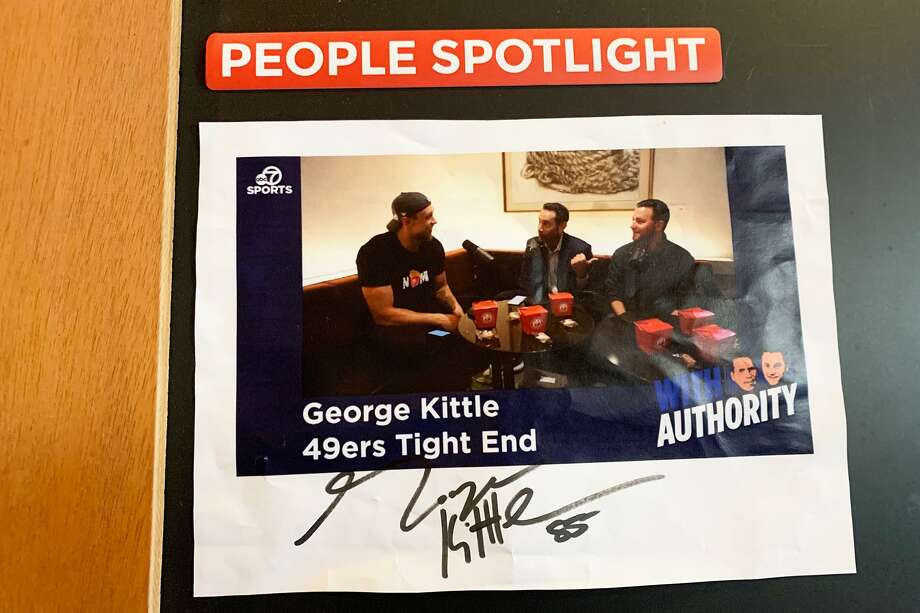 “People always see him in here and they say ‘was that really George Kittle?’” Calderon continues.

I’m the only person in the 40-seat establishment by the time 3 p.m. rolls around, but I get the sentiment.

According to Calderon, Panda Express associates regularly ask him “do you want a fresh one?” as in a fresh batch of orange chicken, hot off the wok. “And he just says ‘No, that’s good.’ He’s really nice.”

Calderon says the staff has gone out of its way to treat him like a guy who lives in the neighborhood, just as regular guy. Except Kittle is anything but regular.

I text my wife to tell her this Kittle story is actually going to work out, that the last five hours cooped up inside of a Panda Express have been totally worth it.

“Hahaha nice, I love that you’re at Panda Express doing hard-hitting journalism,” she texts back. “Also, just FYI that I have no idea who this person is you’re trying to find.”

I now hate every single person who walks through the door who isn’t George Kittle.

Green stripe shirt guy? You are my mortal enemy. Lady in all-black tracksuit who wants a smaller container even though they’ve said repeatedly they don’t have any smaller containers than the small? Please go home. Or away. Just stop being here. Old man with the impressively bushy white mustache and incredibly confusing green argyle socks? NO. NO NO NO.

Why isn’t he here?

Is it date night in the Kittle household? Is head coach Kyle Shanahan BBQing? Is the fact that they played Saturday throwing off Panda Mondays?? Was there a Panda Sundays???

I’ve now officially experienced a shift change at Panda Express. Also I notice I’ve been here so long I can’t even smell the orange chicken anymore — the whiff that flooded my nervous system when I walked in is now just a percentage of my body mass and no longer detectable.

So how does this story end?

Does Kittle come blazing into the restaurant on a wild stallion, catching orange chicken in his mouth thrown by the staff to the top of his steed?

Does the large Indian man sitting next to me rip off his rubber face to reveal he was Kittle all along, incognito so as to not draw attention??

Does he just show up later than usual because he forgot his wallet in his locker at Levi’s????

No, it ends with me leaving with a belly full of orange chicken and cream cheese rangoons, humming Miley Cyrus’ “Malibu.”

That’s tough. I used door dash for my panda this week

Have the Packers improved in the time since the 49ers beat them?